Cross-Cut vs. Vein Cut Travertine - Which One Is the Right Fit for Your Project?

So, you have decided that travertine is the stone of choice for your project. A beautiful, luxurious stone that adds undisputable beauty, character, and functionality to any design and enhances every space whilst adding value.

Still, travertine is versatile in many ways, its appearance included - it can be cut with or against the vein, which creates an entirely different outlook. And here comes the question which type is the right fit for your project - cross-cut or vein-cut? Let's find out… 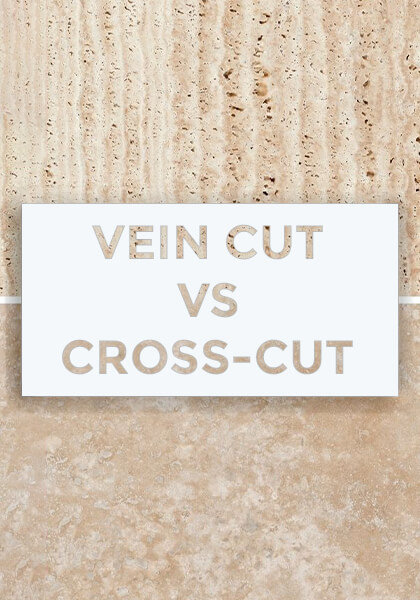 Let's first take a step back… way back in time to understand what veining is in travertine. Travertine is formed by the rapid precipitation of calcium carbonate from hot springs which over hundreds of thousands of years create stratifications that reflect the particular geomorphology of the terrain where it was created. Thus travertine has this amazing, undulating and sometimes mesmeric ‘veining’ created by nature.

If you look at the rock face in our quarry you will see this amazing veining which tells the story of how the travertine was formed 300,000 years ago. Vein cut and cross cut refer to the direction in which we cut the travertine - with or against the vein. The cut is fundamental as the final result is two totally different looks, even if they come from the same stone.

A stone is quarried in massive 12 ton blocks, and when the travertine is sitting in block form we can create slabs by cutting vertically down through the veining of the block (vein cut) or flip the block onto its side and cut horizontally in parallel with the veining (cross cut). The results are very different aesthetically but not structurally making the end choice a simple one of taste and aesthetic suitability for your project. Although the two identical slabs from the same stone blocks share the same composition, the cut is fundamental as it creates two different outlooks.

As we said, cross-cut travertine (also called "with the vein") is when the slab is cut parallel to the veining. So, when the travertine is cross-cut it reveals a whirling and delicate motif, much like clouds. There can still be some minimal veining present because the veins are never perfectly horizontal or flat but generally speaking, the look is dominated by the play of soft hues of colour swirling like clouds..

When considering your project, you have to think of the way the tiles will look when they are laid next to each other. One main reason why some people prefer cross cut is that the joining of the tiles seems more seamless with cross cut as the cloud-like pattern blends in easier with the next piece.

The vein-cut (or also called cutting against the vein), on the other hand, is when the travertine is cut perpendicular to the veining, creating pieces which evidently show the stratification lines of the travertine. So, the vein-cut displays the natural veining, in its essence, displaying the true nature of travertine.

Vein cut tiles showcase the rhythmic veining that nature produced and each and every piece tells a story, is unique. The veins can be darker or lighter than the background colour, and they can also be thin or thick with captivating patterns. As a result, you get some stunning effects, which is especially beautiful in larger formats.

Vein-cut travertine is the most commonly used type as it showcases the reasons why travertine is so well known and appreciated as a stone full of character, warmth and history. However, demand for cross-cut travertine is also increasing as it is more subtle to the eye and as mentioned above, tiles join more seamlessly together visually.

Which is the right fit for your project?

The decision on which type of cut you should choose is entirely aesthetic.

Depending on your project, you might prefer the vein-cut travertine for its rich, undulating lines, or you might prefer to stick with the cross-cut for its aesthetic appearance. Alternatively, you might choose to create a unique look by choosing one cut for a surface and the other cut for another surface as some clients prefer (E.g. cross cut for the floor and vein cut for the walls).

Whatever you choose, it's entirely up to you and what you like and feel would suit your project best. Both cross-cut and vein-cut come from the same stone, so the base is the same and doesn't change. While the cross-cut creates a softer feel, the vein-cut might be more appropriate for more edgy designs.

Although the cut of the travertine is fundamental for its different appearance, in the end, it's just like a color - you should decide what fits best.

If you have any questions or are still in doubt about which cut is better for your project, we are here to make sure you choose the ideal material. You can contact us here.